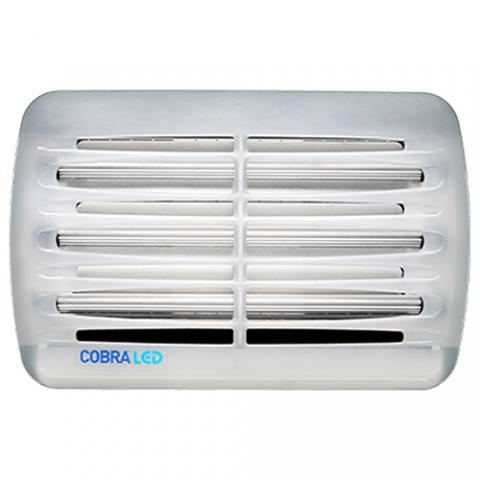 The Genus Cobra’s new and improved electric fly killer has been designed with optimised LED and Translucent Technology to make for one of the fastest and most effective units on the market. Translucent Technology gives a 180° window of attraction for enhanced coverage allowing it to attract pesky flies from almost any direction.

This new model has also done away with the traditional UV bulbs in favour of LEDs which are quieter, more robust and have a much longer shelf life so they do not require changing as frequently making it a much more cost-effective option for businesses or homes located in the countryside which can see large quantities of flies. LEDs require much less electricity to run without compromising on performance, so you get the benefit of a fly killer without the increased bills. In fact, Genus Cobra LED has an 87% reduction in energy costs and carbon emissions than its predecessor the Genus Cobra Fluorescent.

This fly killer is the perfect solution for areas such as restaurants, supermarkets or commercial kitchens. In areas where food is stored or prepared it is of utmost importance that flies are dealt with quickly to prevent contamination. The Cobra Genus LED has gone through extensive testing to make sure it can keep up with the demands and it has proven to:

With the ability to capture so many flies in such a short amount of time, it’s important to keep the unit well maintained in order to keep it hygienic, looking good and performing at its best. Not to worry though, as it couldn’t be easier. The tool-free access means it’s quick and easy to remove the cover, to clean and change glue boards, so minimal training is required.

There are no Frequently Asked Questions for this product.
Perhaps you would like to be first to

Ask one of our experts!

We aim to answer all questions as soon as possible - often within a few hours! Although please bear in mind that during busier periods it may take up to 48 hours to receive a response. We look forward to hearing from you.