Keep cool for less at home or at work with our amazing range of electric fans and air coolers, or browse our range of extractor fans if you're looking for a way to ventilate a room. Whatever it is you're looking for, you'll find it here at the best online price. 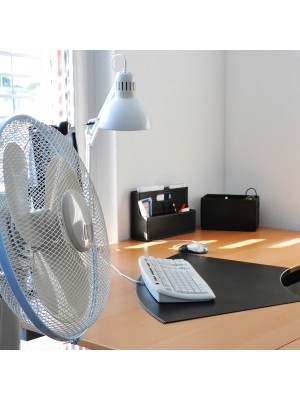 Keeping Cool at Home or at Work

While the Great British summer temperatures aren’t quite as scorching as they are in other countries, they can still be overpoweringly warm. Keeping cool in the summer is every bit as important as keeping warm in the winter, so it’s important that you protect yourself from the heat wherever you are. Fans, air coolers, and air conditioners are all effective ways to do this! Each option has its own benefits, meaning you might prefer one option over another. We’ll go into these differences here so you can decide which is the best for you!

What’s the Difference Between Fans, Air Coolers, and Air Conditioners?

You might think, because fans, air coolers, and air conditioners keep you cool, that all three options are basically the same. As we’ll go into here, that’s certainly not the case! There are some big differences between the three, meaning that – depending on your requirements – one might be a much better fit for you than the others. To help you get the most for your money, we’ve put together this handy buyer’s guide to help you make the right choice.

Fans have been around for at least 5,000 years, and while their designs have changed with the times, the principles behind them are the same as they were back then. These principles are that when air is moving, it’s naturally cooler than when it sits still, with the amount of air moved and the speed at which it’s moved at determining how cool a breeze feels.

It’s important to understand this as it’ll help you determine which fan is best for you. There’s no point picking up a tiny desk fan if you want to keep a large, open space cool, and likewise, if you only want to cool down a small office, you probably don’t need a huge 18” fan. As there is such a massive range of options available, it’s a good idea to check our range above to decide which one is best for you. We’ve put together a simple list of the different types of fans so you can see which ones are best for you at a glance.

Small fans which sit on your desk. They’re portable and powerful enough to cool one or two people around a desk, and they’re known for being very affordable.

These fans are what most people think of when they think of a cooling fan – they’re a mid-size set of fan blades perched on top of a pole. They’re simple but effective, and, depending on the power you go for, can be used to provide a refreshing breeze to a small or large roomful of people.

The more stylish cousins of pedestal fans, tower fans don’t have any exposed fan blades. They instead contain several sets of smaller blades inside a tower for a more slimline, modern look. This makes them a popular choice with homeowners.

Fans are always more effective when placed high up or near doors and windows, where they can complement the natural airflow within a room. Wall-mounted fans let you place your fan in the perfect position to circulate cool air around a room without taking up any floor space.

Usually mounted over a light fitting, ceiling fans improve the airflow around any room with style. Depending on the size of the fan you choose, they can be suitable for even very large, open-plan rooms. They’re a good choice for boardrooms or public-facing businesses, where it’s essential to keep everything looking professional and uncluttered.

Air circulation fans do exactly what the name suggests – they’re very powerful fans that circulate air around the room. As they’re so powerful, they’re not really suitable for small offices and bedrooms, but they’re a perfect fit for large rooms.

Not all fans are designed to keep you cool. Instead of blowing air into a room, extractor fans suck it out, meaning anything that’s in the air – such as bathroom steam or chemical vapours from factory floors – is sucked out with it.

If you’re looking for an industrial extractor fan, the chances are you know all about them and why they’re important – and if you’re not sure of which exact model is best for you, just get in touch! However, if you want a smaller extractor fan for your kitchen or bathroom, you might not know what you should be looking for.

Domestic extractor fans are much smaller than their industrial counterparts, so you should look for the fan with the biggest airflow. Airflow is measured in m³/h (metres cubed per hour), and it lets you know how much air a fan can move. The more air it can move, the faster it’ll remove all the steam from your room, which is what you’re really looking for.

If you’re after something with a bit more cooling power than a fan that’s still affordable, you should consider an air cooler. Air coolers use what’s known as evaporative cooling to produce a chilled breeze. They’re a great mid-point between affordable fans and super-cool air conditioners.

Air coolers consist of three main parts – a fan, a cold water tank, and a piece of absorbent material. The material – usually known as a cooling pad – is soaked in cold water. As the water in the cooling pads evaporates, it sucks heat out of the air, leaving it cool and humid. This cold air is blown out into the room by a fan, improving the airflow of a room and making the air feel fresh and clean. The process is similar to the way the wind gets cold as it blows over a lake, meaning air coolers are known for providing a more natural-feeling breeze than fans. This extra cooling power means air coolers are ideal for south-facing rooms at home or at work, where the air can get very hot and stuffy.

While air coolers don’t have the same cooling power as air conditioners, there are two key benefits – they’re much smaller and much, much more affordable. Air coolers don’t contain a lot of complex and heavyweight machinery, so they’re easy to pick up and wheel around wherever they’re needed. The fact that they’re so simple also means they don’t cost much to buy or to run, making them the perfect low-cost cooling solution for homes and offices! 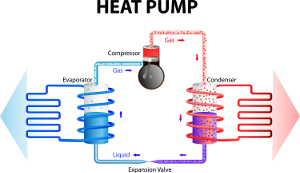 If you want a constant, heavy-duty chill that you can run all day, an air conditioner is what you need. While their cost and size make them less common in homes, they’re often the only option for many businesses. They offer unmatched cooling power that means they’re effective even in very large, open shop floors and restaurants, circulating powerful blasts of chilled air around almost any room.

Air conditioners work using refrigerant gas, which is passed through a compressor, a condenser, and an evaporator. This turns the gas into a liquid and back into a gas again in a constant cycle, sucking heat out of the air. The hot air is blown out of an exhaust (where this exhaust leads is up to you, but it’s usually best to make sure it leads outside where possible), while the newly-chilled air is blasted out into your room. As you might expect, this takes a lot of fairly complex machinery, so air conditioners are often large, heavy units that are commonly mounted in a wall. While you can pick up a portable air conditioner, these units are still quite weighty and bulky, so you need to make sure you have adequate space wherever you place it.

The main benefit of air conditioners is simple: they’re very cool! Air conditioners are more common in very hot parts of the world for a reason, so when you pick one up, you can guarantee it’ll keep you perfectly chilled on even the hottest day. An added bonus of air con units is that they’re low-maintenance. If you’re an employer, you don’t want your staff to be wasting time fiddling around with the temperature at work – air conditioners don’t need any day-to-day maintenance and never need to be refilled or adjusted. You simply set your desired temperature and forget about it – perfect for busy offices and shop floors. Considering that men waste, on average, over 6 minutes a day on adjusting the temperature at work, while women waste around 8.5 minutes a day, this adds up to a lot of time saved over the course of a summer!

Keeping Cool at Work – What Do Employers Need to Do?

If you’re at work, remember that it’s a legal requirement for employers to provide a reasonable working environment for their staff. Part of that means you should take measures to ensure they don’t get too hot in summer. For thousands of businesses across the country, the easiest and most cost-effective way to do this is with an electric fan or an air cooler. For larger businesses – especially customer-facing businesses – it might be better to use the extra cooling power of an air conditioner.

Why Is it Important to Keep Cool? 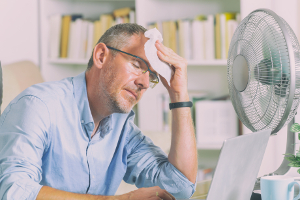 How you keep your employees cool is up to you – but it is important that you do so! Even if your office isn’t dangerously hot, a stuffy workplace can lead to a big drop in productivity. 20% of men and 23% of women will leave an office to cool down if it’s too hot. Generally, the temperature in the workplace shouldn’t climb above 25°C (the optimal temperature when we’re at our most productive) – anything above that is considered too hot and will harm productivity.

This applies at home, too. You won’t get as much done if you’re baking hot, and if you let yourself get too warm, you’re putting your health at risk. When temperatures are too high, you’re at risk of heat exhaustion, when you might feel a little dizzy and tired. This can hit you suddenly, so if you know you’re going to be doing some housework that requires you to go up a ladder – for example, painting or cleaning the loft – it’s a good idea to make sure you have a fan or an air cooler to hand. The next stage of heat exhaustion is heatstroke, which is far more dangerous – this occurs when the body can’t cool itself down properly, which can affect your brain and your internal organs. Older people and young children are particularly at risk in the heat. The best solution to these problems is to make sure they never occur in the first place, so ensure you keep yourself cool and shaded on very hot days.

If you’re a pet owner, it’s important to keep your pets cool on a hot day, too! Animals don’t sweat as we do, so they won’t feel as much benefit from a fan like us, but they will still appreciate a fan or an air cooler running in the house! A fan or an air cooler will lower the ambient temperature of a room, meaning pets should be safe from heat exhaustion. As with humans, very young and very old pets are at greater risk from high temperatures.

If you’re looking for a fan to use in a home with a pet, we recommend a tower fan. This is because they’re more compact, with no exposed blades on show to distract curious animals! Tower fans are also more evenly balanced and sturdy, so it’s harder for excitable pets to knock them over.